Life on the Fediverse or the Social Cloud is interesting. For me this is the first time I participated in an online social network for a couple of years. Long ago I was an avid Twitter user, before all the crazies, bots and advertising took over. And I mean avid.

When I downloaded my Twitter archive a while back the file with all my Tweets in .json format was 57.7 MB, totalling over 66.700 Tweets. Twitter rounds it to the nearest hundred and I didn’t feel like finding out more precisely how many Tweets there were. I don’t know if it’s still a thing, but back in my day there was a limit to how much you could tweet in a day and also a limit per hour. If you crossed that limit you couldn’t send any more tweets. It was called a tweetjail. Me and my close friends regularly crossed those limits so we all had at least one backup account, so we could just keep on spamming each others timelines.

Those were the days

That little paragraph was just to visualize how I was into social media. A little after that I found my way in a group of people/friends from all over the country and for about two months we even had a blog to just bitch about random stuff. That fell apart quickly when everyone realized we would actually have to write something. I never really participated in the whole Facebook deal even though I had two separate accounts in two separate times, could never get into it. Didn’t work for me. It was the same with Snapchat, I never felt like my life had enough going on to share, even with my closest friends. That changed when I started working at a zoo, we would just send stupid stuff to each other, joking about the presentations and the caretakers. When I stopped working there, I was done with Snapchat. Did a GDPR request for my data and I’m going to delete the account.

All these networks were always with people I know introducing me into it for me to start using it. Twitter started at school, Snapchat really started at work, I always had guidance. Getting on to the social cloud was different for me, because as far as I know I am the only kind of privacy-preferring or open sourcy person I know. I made @Vandrar almost a year ago I think, never really touched it until like two weeks ago because of precisely that. What is there to do here, how do I make new friends without having at least one friend to introduce me around, get the snowball rolling? Turns out I didn’t need to be given a tiny snowball, but could just start rolling myself.

Right now my Mastodon account is nowhere near the level my Twitter account ever was, I don’t think it’ll ever make anywhere close to 66.700 Toots, and I don’t think I’d say I’ve got friends on the Fediverse yet, but it’s starting to be nice. It feels like home already. Waking up and reading about the drunken shenanigans some people have, about all kinds of free libre open source software and everyones experiences with that, it just feels right.

Get to your point already

The thing I noticed yesterday and today while reading through everything and talking about some stuff is, I don’t know anything. Everyone I read from is like a Supreme Chief Expert Master Professor on Privacy, FLOSS and GNU/Linux and I’m just there waddling around with my little Debian logo

. I feel like I have such an extreme amount of things to learn still, but also want to do every single step perfectly, but also everyone has at least 2 opinions on what the perfect step is, so there is no actual perfect step. It’s weird man, it feels like home but also high school all over again.

Now when I think rationally, like we’re all supposed to do, I know that there’s always a learning curve. I’ve been getting into Linux things, homelabbing, selfhosting and everything slowly for two or three years now and of course there is a lot more to learn. People do 4 years studies to learn less than what I already know (I think). And of course I know there are people out there that know less than I do, that might even want to learn some stuff from me or hear about my insights. But as emotional beings, when do we ever think rationally? 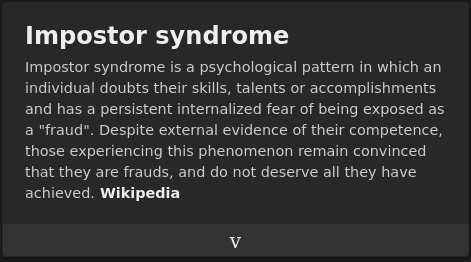